Have you ever considered about running a forum? If you are a community driven webmaster or entrepreneur you certainly have. But what are your options? Also in this case statistics might come in handy.

Thanks to a recent research by builtwith.com we have the statistics for websites using different forum software technologies. Understanding what’s popular and what’s not so much among worldwide users is definitely a great instrument to support our decision process.

The analysis has found out that the top 10 forum platforms, ordered by number of users, are: 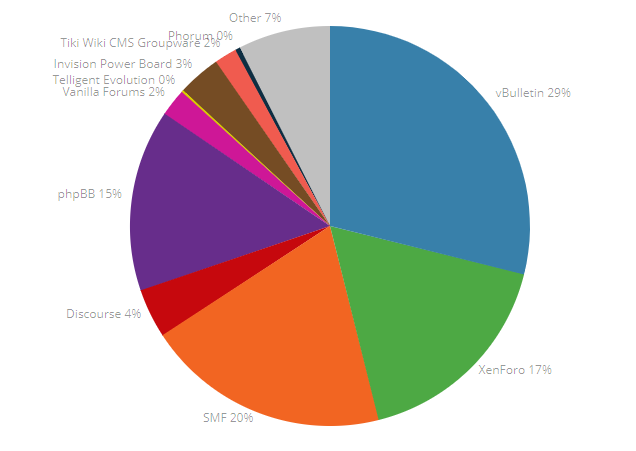 Each of them is directed towards a specific class of users, so let’s learn something more about them and let’s see whether one software better suits your needs.

(FREE) Simple Machines Forum software, or SMF software, is an open source, Internet forum, message-board program developed by Simple Machines. The name reflects the communities’ initial goal of providing a program that could be operated by novice programmers and require minimal server resources. Simple Machines Forum is an open-source discussion board software project, which consists of volunteers participating in various operating functions including development, customization, documentation, localization/translation, user support, and marketing. The project is owned by a non-profit organization, named “Simple Machines”. Simple Machines is organized and operates as a not-for-profit membership corporation organized under Nevada law. SMF is available in 39 languages in UTF-8 and non-UTF-8 encodings. There are more than 20 mega-forums, ranging in size from 1,000,000 to 80,000,000 posts, operating on this platform.

(COMMERCIAL) XenForo is a commercial Internet forum software package written in the PHP programming language using the Zend Framework. The software is developed by former vBulletin lead developers Kier Darby and Mike Sullivan. The first public beta release of XenForo was released in October 2010. XenForo 1.0.0 Stable was released on March 8, 2011. XenForo has several SEO features built in. On November 12, 2014, Chris Deeming officially joined the development team. One of his products Xen Media Gallery, now XenForo Media Gallery, joined the XenForo family of products. The second major release of XenForo is XenForo 2.0. In November 2016, a demo version of the alpha was launched by XenForo. In February 2017, the first two developer previews were released by XenForo. The developer previews are unsupported releases targeted at developers to review the new codebase, and as such contain no web-based installer or import features. In September 2017, the first beta was made available to all active customers. On 28th November 2017, the first stable release of XenForo 2.0.0 was made available.

(FREE) phpBB is an Internet forum package in the PHP scripting language. The name “phpBB” is an abbreviation of PHP Bulletin Board. Available under the GNU General Public License, phpBB is free and open-source. Features of phpBB include support for multiple database engines (PostgreSQL, SQLite, MySQL, Oracle Database, Microsoft SQL Server), flat message structure (as opposed to threaded), hierarchical subforums, topic split/merge/lock, user groups, multiple attachments per post, full-text search, plugins and various notification options (e-mail, Jabber instant messaging, ATOM feeds). phpBB has a community of users who contribute to the overall project with content such as Extensions, MODs and Styles. They also provide supplementary support as assistance to the phpBB Support Team. Community users are encouraged to participate in these support requests and to contribute to the overall betterment of phpBB core code.

(FREE) Discourse is an open source Internet forum and mailing list management software application founded in 2013 by Jeff Atwood, Robin Ward, and Sam Saffron. The application is written with Ember.js and Ruby on Rails. PostgreSQL serves as its back-end database management system. From a usability perspective, Discourse breaks with existing forum software by including features recently popularized by large social networks, such as infinite scrolling, live updates, expanding links, and drag and drop attachments. However, the stated goals of the project are social rather than technical, to improve online discussion quality through improved forum software. The source code is distributed under the GNU General Public License version 2. Therefore Discourse can be self-hosted by anyone. On May 2017, co-founder Jeff Atwood said in an interview that the company is generating approximately 120,000 dollars per month at that time. With the money the company pays salary for its full-time employees who maintain the software and develop new features which benefits those who are self-hosting the open source software, too. This is an example of an open source software business model where a company sells professional services to willing customers.

(FREE) Vanilla is a Canadian software company founded in 2009 in Montreal. It is both a cloud-based (SaaS) community forum software and an open source community supported software. The company’s main product is Vanilla Cloud. Its open source product, Vanilla OSS, is a lightweight Internet forum package written in the PHP scripting language using the Garden framework. The software is released under the GNU GPL. Vanilla Forums is free software, standards-compliant, customizable discussion forums. Since 2009 there is also a cloud-hosted version (offered by Vanilla). Vanilla’s open source project was released on 1 July 2006, and has since undergone many changes, the most notable being the complete rewrite between Vanilla OSS and Vanilla Cloud, the latter of the two became the primary product and Vanilla 1 was passed into the hands of other developers. Vanilla 2, open source is still maintained and supported by the core team. Vanilla is designed to bring forums back to their roots, providing core functionality with additional features such as emoticons available as plugins.

(COMMERCIAL) Get Satisfaction is a customer community software platform for technical support based in San Francisco. It was founded on January 31, 2007, by several people, including Lane Becker, Amy Muller, Thor Muller, and Jonathan Grubb. It publicly launched in September 2007. In April 2015, Get Satisfaction was acquired by Sprinklr, a social media management company. The company describes its product as “people-powered customer service” and “Online Communities. The shortest distance between you and your customer.” Get Satisfaction online communities can be a private and/or public place for customers to ask questions, submit an idea or complaint, or give praise. Companies can respond to issues regarding their products or services; official responses are marked as official answers to separate them from other responses. Users can rate responses based on how well they resolve the issue.

(FREE) NodeBB Forum Software is a next generation forum software that’s free and easy to use. It won 2014 CMS Critic People’s Choice Awards for Best Forum Software. NodeBB Forum Software is powered by Node.js and built on either a Redis or MongoDB database. It utilizes web sockets for instant interactions and real-time notifications. NodeBB has many modern features out of the box such as social network integration and streaming discussions, while still making sure to be compatible with older browsers. Additional functionality is enabled through the use of third-party plugins.

If you do not know yet where starting, choose SMF, it is free and easy to install, configure and manage. Personalize it with a free skin that looks professional and is responsive like the latest theme from Forum Mechanics, Sketchzoo (demo – download). And enjoy your new role of forum administrator!